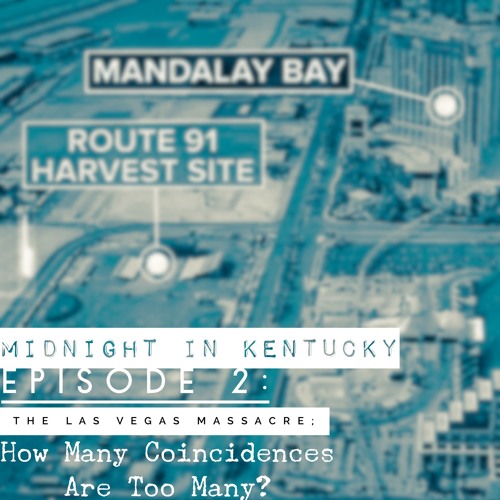 In episode two of Midnight in Kentucky, we dive right into the most controversial conspiracy we could find; the tragic Las Vegas Route 91 Harvest Festival massacre of October 2017. We use the conversation of the vast array of strange occurrences in the official narrative of this case as a spring board for discussion on just what is going on with the epidemic of mass shootings currently happening in America. We discuss the disappearance of security guard Jesus Campos following the shooting, Stephen Paddock and multiple other mass shooter’s destroying their hard drives, and Paddock’s involvement with the notorious Lockheed Martin. In the introduction to this episode we also talk on a few different conspiracies of the day, including UFO sightings over Evansville and Britain in January, the possible actual launch of missiles in Hawaii, and ponder upon just what touched down in Detroit around the same time earlier this year. Welcome to episode two of Midnight in Kentucky: The Las Vegas Massacre, where we ask you for the first time, ‘How many coincidences are too many?’

-HAWAII WORKER WHO SENT FALSE MISSILE ALERT WAS ‘100 PERCENT SURE’ IT WAS REAL; Newsweek

-Another Las Vegas massacre survivor dies weeks later — this time, in a hit-and-run; The Washington Post

22:10: Philip Schneider, known for his alleged involvement with building an underground base at Dulce, New Mexico, and a battle with grey aliens, was misnamed as Philip Spector.

34:40: The Las Vegas Sheriff at the time of the massacre, Joesph Lambardo, is misnamed as Joe Lombardi.