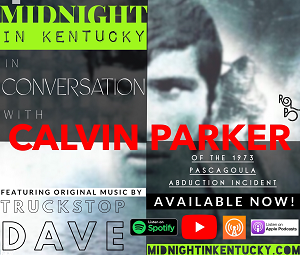 Listen to “In Conversation with Calvin Parker” on Spreaker.

On tonight’s episode, we leave the Bluegrass behind for a bit and venture a little further down south to Pascagoula, Mississippi, where we had the honor of speaking with noted alien abductee, Calvin Parker. On October 11th, 1973, along with Charles Hickson, Calvin was taken from the pier where the two were were fishing and on board an alien craft in what would become one of the landmark cases of the phenomenon. Forty six years and two books later, we sit down with Calvin to discuss the multitude of witnesses that have come forward since to say they saw the craft that took the two fishermen, what he learned from Betty Hill, why he chose to give his account to the public so long after his experience, talk about his further encounters with the enigmatic entities that took him from Pascagoula in ‘73, and much, much more! In the introduction to this episode, we discuss the recent frenzy caused by the UV lights of a lettuce greenhouse in Rickman, TN when multiple witnesses came to us to report a massive UFO. We use the incident as a springboard to discuss paranormal investigations at large, how we work to solve these mysteries at MIK, and why being able to ask questions without scorn or ridicule is so important in getting the answers we all seek. This is one episode you don’t want to let slip by in your pod feed! Join us tonight for Midnight in Kentucky in Conversation with Calvin Parker!

Audio support for this episode was provided by TruckStop Dave and features tracks:

-Pascagoula- The Closest Encounter: My Story by Calvin Parker