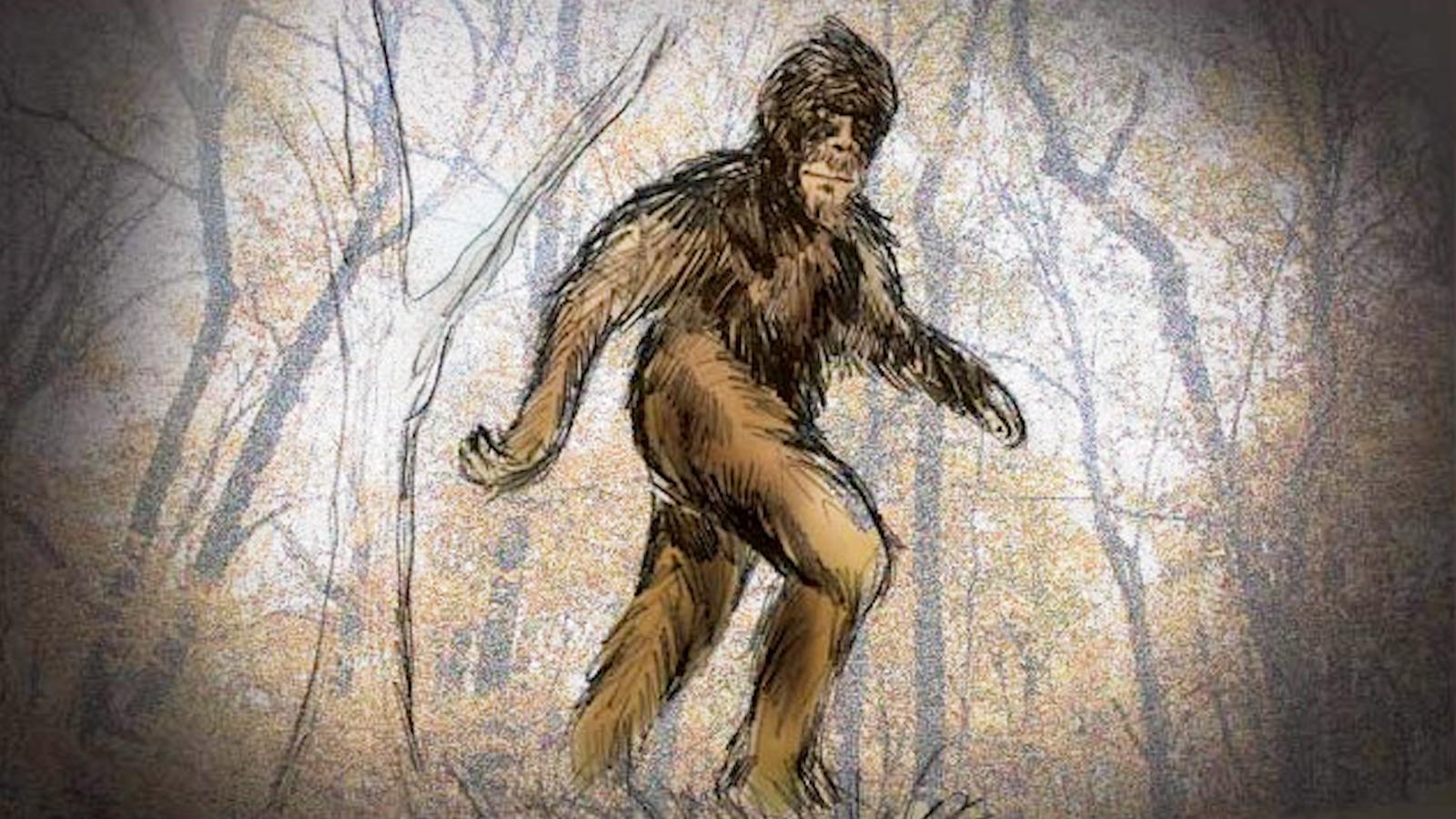 The forests and wooded areas of Kentucky have served as residence to the entities of myth, legend, and lore since long before the first Europeans set foot in the Bluegrass. Petroglyphs of large four toed footprints and portraits of ‘beastmen’, carved into cave walls and cliff faces around the state, document the experience of indigenous Kentuckians with a hair covered, bipedal creature, or race of creatures, throughout time. In the late 1800s, both the Louisville Courier-Journal and the Adair Co. News ran stories documenting the discovery of a collection of ten foot skeletal remains in and around Columbia. Three of these large inexplicable skeletons were found laid to rest within a hidden cave, lined with ancient hieroglyphics, while another was excavated from a native burial mound located in the backfields of a local farm.

As we’ve discussed before, one of the most noted men to pioneer Kentucky, Daniel Boone, had his own encounter with one of these beasts while exploring the Smoky Mountains near Middlesboro. Known to the Cherokee people as the Yeahoh, Boone wrote in his journals that he shot and killed the ten foot tall creature and that it had taken three rounds from his musket to finally bring it down. In modern times, the falling leaves and dropping temperatures of late autumn find the woodlands of Kentucky full of hunters and outdoorsman, more than a few of whom have returned home with tales reminiscent of Boone’s before them. In addition, the National forest that now bears his name is home to dozens of sightings per year of these hairy hominids.

Barton Nunnely, author of the excellent Compendium on Kentucky strangeness, Mysterious Kentucky, says that he and other researchers have gathered enough reports of these creatures around the Bluegrass to assume that there is, in the very least, a small population in every county. Oftentimes, due to the contentious nature of the subject and the tight-nit culture of small town life, accounts of coming face to face with these forest entities go unreported to investigative groups and are instead passed down from generation to generation, only coming to light when some lucky researcher stumbles over them in conversation with one of the younger family members to which they have been told. Such is the case of one fox hunter who had a run in with a creature in the woods of the Windsor area, just on the other side of the Russell County line, in Casey County. The witness, since passed, was a well respected member of the community, a member of good standing at the local church, and an avid outdoorsman, who, nevertheless, was so impressed by his encounter that he passed the tale onto his children, who in turn passed it on to their children, who will now undoubtedly pass it to their own.

Another account from the hills of Casey County, documented in Nunnely’s book, tells of a five-year-old boy who was so spooked by his sighting of what he dubbed ‘the hairy man’, in the woods around Wilson Ridge in 1957, that he would breakdown into panic attacks every time he attempted to venture outside afterward. The event so impacted the boy’s life that he would continue to refuse discussing the creature, or his sighting of it, on into adulthood. Four years earlier, two children ran upon a similar ‘hairy man’ in the Casey County wilderness who they claimed was crouched down and using two sticks to dig into the mud. In the late 60s, a slew of reports of ‘the varmint of Goose Creek’ would begin pouring out of Casey County. Local hunters claimed that catching scent of the varmint would shake even the most steadfast hunting dog, sending them running the opposite direction, and in 1965, a retired state trooper would report hearing a ‘night time yowler’ in the area. Additionally, the late 60s would see reports from Liberty of what could only be described as ‘a thing’ peering in the windows of local teenager girls.

What is perhaps one of the strangest experiences with these hair covered entities to occur in the bluegrass, or elsewhere, occurred around KY HWY. 461 between Somerset and Mt. Vernon, and was reported to Nunnely after having happened during the first week of December, 2004. While returning home from visiting a family member with a friend at the Lake Cumberland Regional Hospital in Somerset, the witness reports that after missing her turn she attempted to make a U-turn and saw a dead cat lying on the side of the road and then, suddenly, a massive ball of white fur that was too close not to hit. The motorist says that they did not see any head, arms, or legs, only what appeared to be a ball of fur, and that when their vehicle should have collided with it, the car seemed to go up and over the thing. The smell that emanated from the fur ball was so nauseating that it filled the gas station parking lot where the duo stopped soon afterward to check the damage to their vehicle, which proved to be substantial. The undercarriage of the car was significantly devastated and white hair was found in the tailpipe and fender. It wasn’t until the pair had again gotten back on the road, and was nearing Lexington, that they realized there were up to ninety minutes for which they couldn’t account.

Additionally, in retrospect, the witnesses of this peculiar instance report feeling an odd sense of calm throughout the experience, even laughing hysterically during the ‘collision’ with the thing, concluding something strange had happened to them only after realizing they couldn’t recall an hour-and-a-half’s worth of time. Missing time is most commonly associated with the phenomena of alien abduction, but has been reported across the spectrum of encounters with the otherworldly, and seemingly implies like that experiences with things of this nature can affect our perception of reality as we know it.

Which begs the question, just what is being witnessed in the wilderness of Kentucky? Are these hairy hominids a zoological mystery yet to be identified by modern science? A preternatural tribe of humanoid creatures forgotten by time in the hills of the Bluegrass? Or, are these forest dwellers something far stranger still? An entity, or race of entities, more ethereal than physical, unbound by our earthly confinements, here to remind us that what awaits us in the woodlands of Kentucky, and worldwide, is possibly something more mysterious and indescribable than anything we could ever perceive.